Left wintery Melbourne on our usual Royal Brunei flight with only one stop now at Brunei then a direct 14 hour flight to London.   Arrived at Heathrow early morning and made our way to Sooz & Ten’s.   By the time we made it there the girls had already left for school so it was just Ten and Desmond, their 6 month old Cockerpoo puppy, to welcome us. 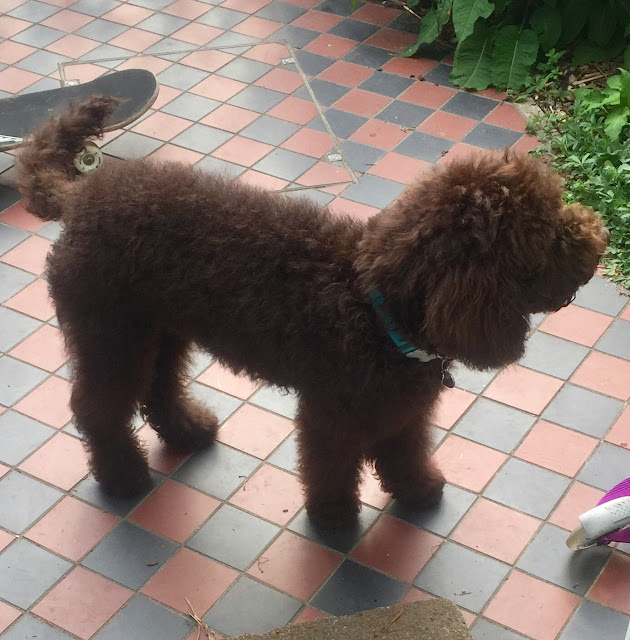 The sale of Sooz’s 3 vet clinics had just been finalised.   She’s still working at the clinics for the company that bought them but most of the strain of day-to-day running of the clinics has disappeared so much less stress for her.  We picked the girls up after school.   They are still leading very busy lives with piano, trumpet, gymnastics, cubs and swimming on week nights after school.

We spent two nights in London with them then caught the train to Market Harborough near our marina.   The boat was in good shape with new front doors fitted over the Winter.   We spent a night at the Marina then set off up the Foxton flight of ten locks.   A fellow was sitting watching us just before entering the first lock and asked if we would ‘like a hand’.   Turned out he was visiting from Saskatchewan in Canada.  He took the windlass and wound all the paddles up the flight so it meant I just had to open the gates.  So much easier and very grateful for his help. 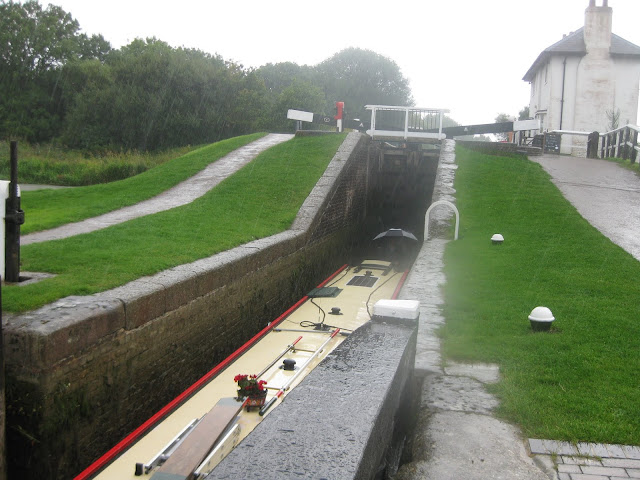 We stopped at the new Marina at Kibworth which is owned by our Debdale Marina.   It has taken 9 years to build but is almost complete now.   We were shown over the new building which will have a huge lounge area for boaters and also showers, toilets and laundry facilities.  There will also be a chandlery and a massive work area for boat building, engineering and carpentry.  The fellow who we have booked to paint our boat next year has a large section on the ground floor for his boat painting and also a large workshop area upstairs where he can give classes in boat painting.   The whole building will have underfloor heating with an ingenious system that uses the heat out of the water in the marina.  It even works when the whole area is iced over.   Amazing. 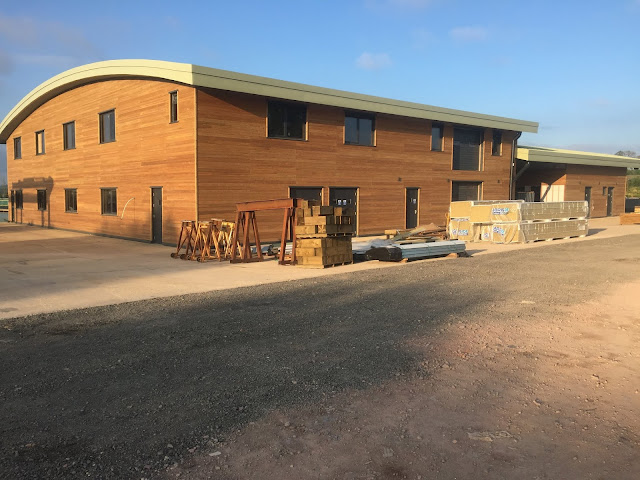 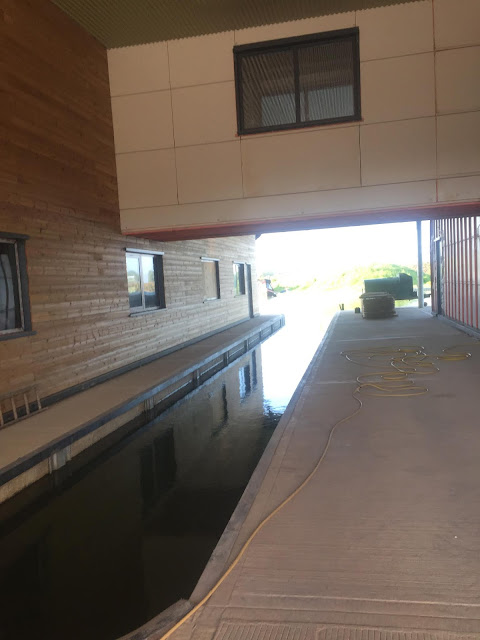 On Saturday we caught a taxi to the large Crick Boat Show.    Lovely warm sunny day so big crowds attending.   It was probably our third visit there so we really didn’t see anything too exciting but it was good to catch up with some familiar faces.

Next day we moved on to Braunston and had our usual mooring opposite the hotel where we went for lunch. 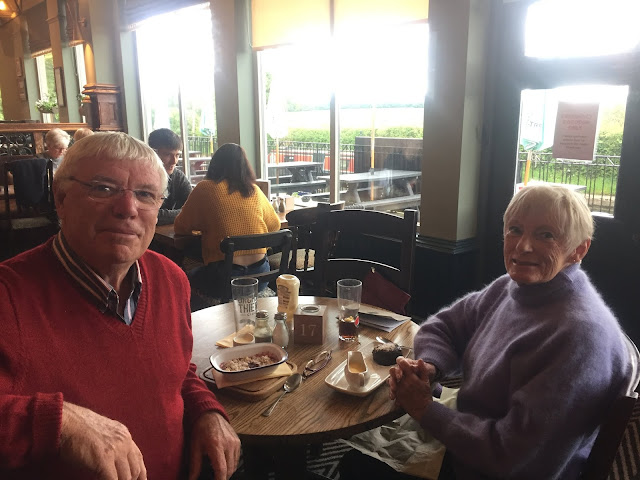 After two nights we moved on to Rugby.   The historic town looked quite sad with many shops closed and not many people around.  This is probably due to the large out-of-town shopping centres near our canal mooring which have been built since our last visit.


The canals look so pretty with young ducklings and swans beginning to appear with Irises, Foxgloves, wildflowers and loads of Hawthorn bushes (Mayblooms) in flower.   The water looked like it was covered in pink confetti from the Hawthorns but it made a real mess of my cleaned carpet when we moored up under a tree waiting to go into a lock. 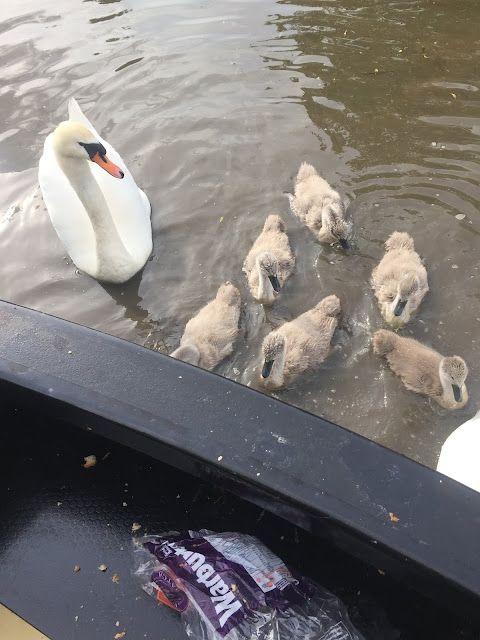 I had a surprise booked for Terry’s birthday on the Sunday.   All he was told was that we were catching the train from Rugby to London on Saturday afternoon.   When we arrived at the huge Euston Station and then caught a tube train to Tottenham Court Road Station he thought we might be going to a theatre in the West End.  But no.....we then caught a Central Line train to Epping - the end of the line - where we were booked into the 15th century Thatched House Hotel. 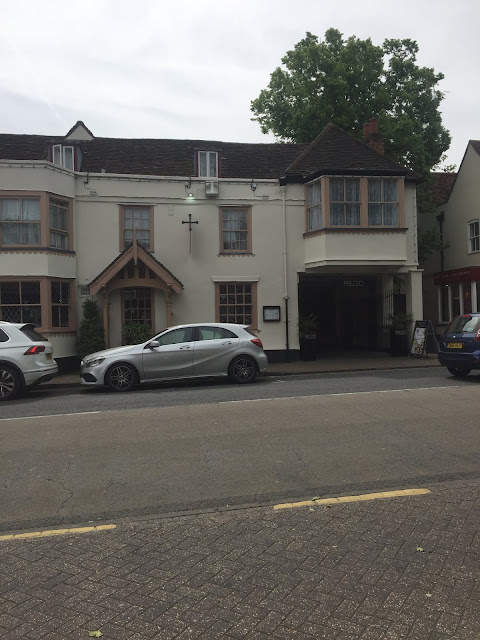 Epping turned out to be a nice little village but Terry was still in the dark the next morning when I told him a ‘tourist bus’ would be picking us up at the front of the Hotel.   He was so surprised when Sooz, Ten and the girls pulled up.

They drove us to the nearby North Weald airfield where all was revealed.   Terry  was booked in to drive a ‘new’ double decker bus for 20 minutes, then a long  ‘bendy’ bus and finishing with a 1956 old Routemaster bus. 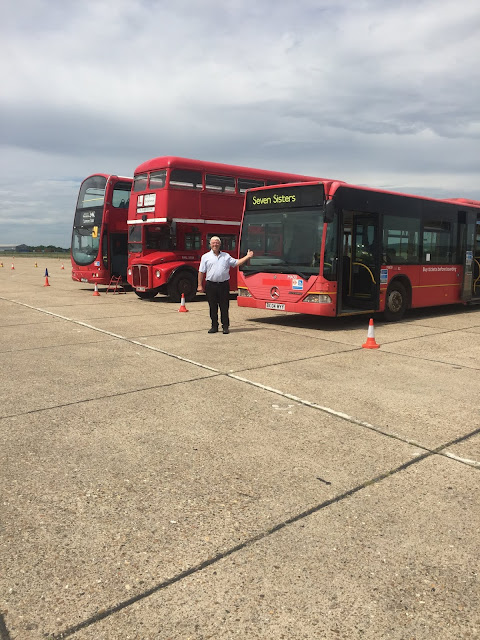 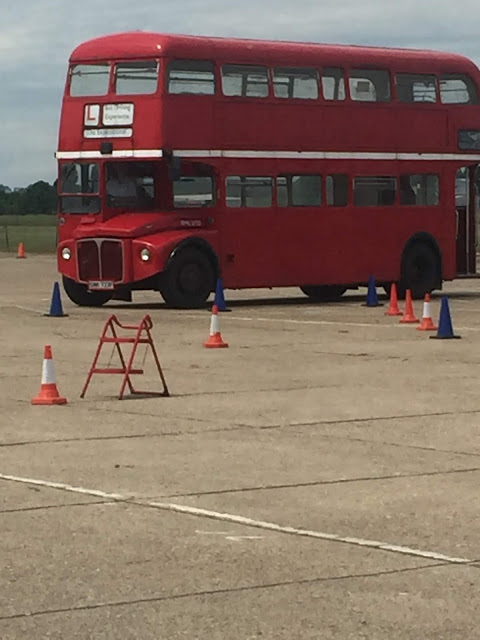 Over the years we have been coming to the UK he always joked that he would love to apply to be a London busdriver whenever he saw the notice ‘Busdrivers wanted’.    At the end of the session he decided the new bus was the hardest to drive because the wheels were set way back from the front of the bus and it was hard to judge when to start turning the wheel when cornering and doing the slalom course.   He now has a lot of admiration for the London drivers who are able to weave in and out of heavy traffic while dodging bike riders and pedestrians. 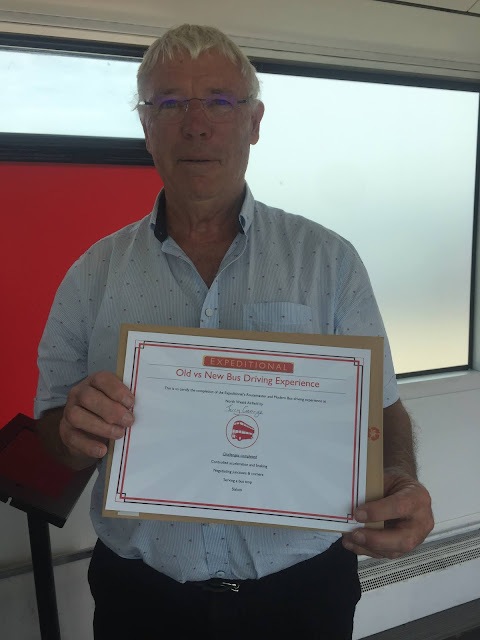 We all then went to a little country pub for a traditional ‘Sunday roast’ before Sooz and Ten drove us back to the Epping station to catch the two trains back to Rugby.

Next day we backtracked from Rugby to Braunston then turned onto the Grand Union Canal til we reached Royal Leamington Spa.   Been there twice before but very disappointing this time as there were no massive hanging baskets of flowers in front of the major buildings and the gardens looked very bare too.    A local told us that the gardeners were just starting to put up the hanging baskets so perhaps we were there a bit earlier this year.

Quite a few locks on the next stretch to Warwick but we partnered up with a hire boat which had lots of willing workers on board so they were a great help with the locks.    Arriving at Saltisford marina at Warwick where we have moored before we went for a walk into town.   At the ancient hospital there was a crew filming Charles Dicken’s Christmas Carol so the pavements were covered in fake snow with gas lights along the streets.   Apparently only a small production with no ‘famous’ actors. 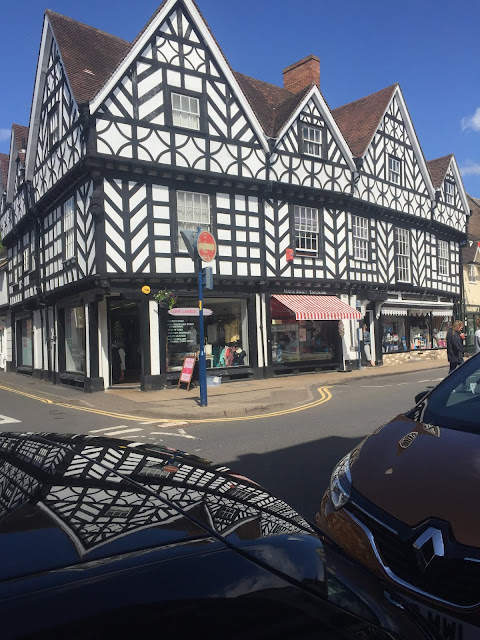 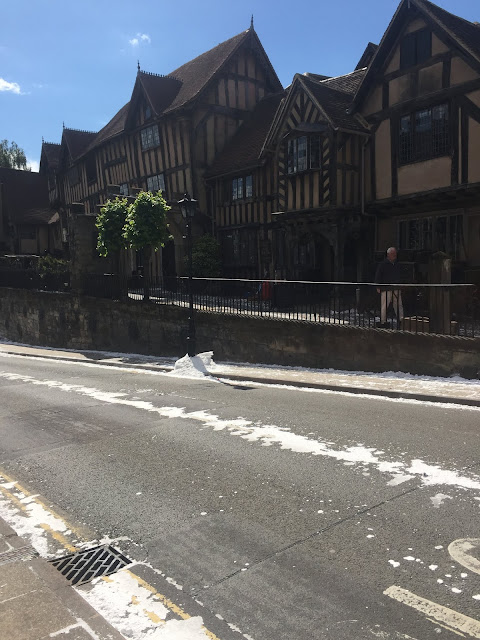 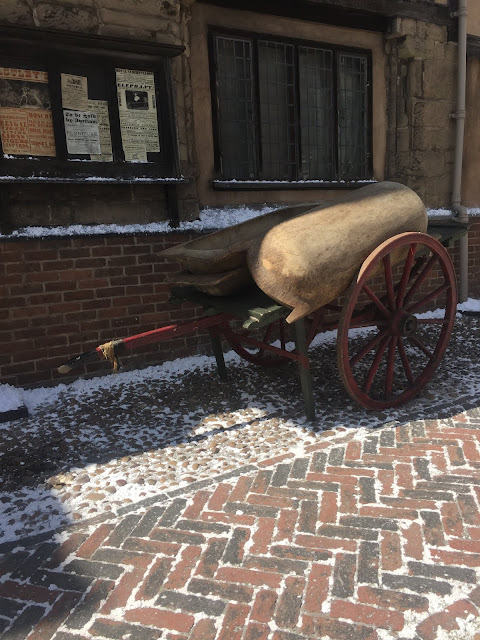 Looked like pouring with rain so we ducked into the Warwick Church where we went down to the crypt where lots of Earls of Warwick were buried. 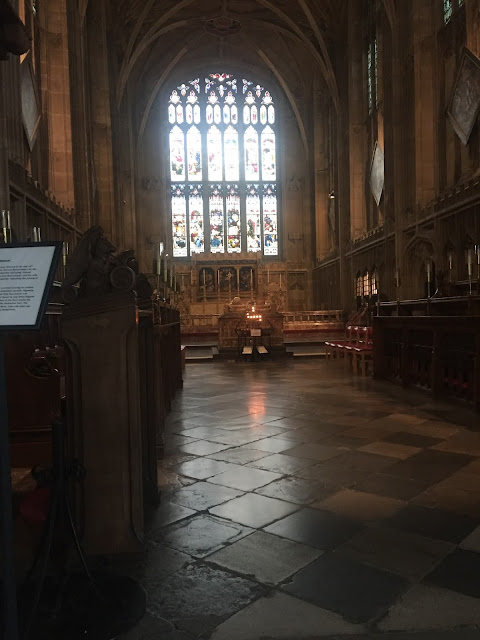 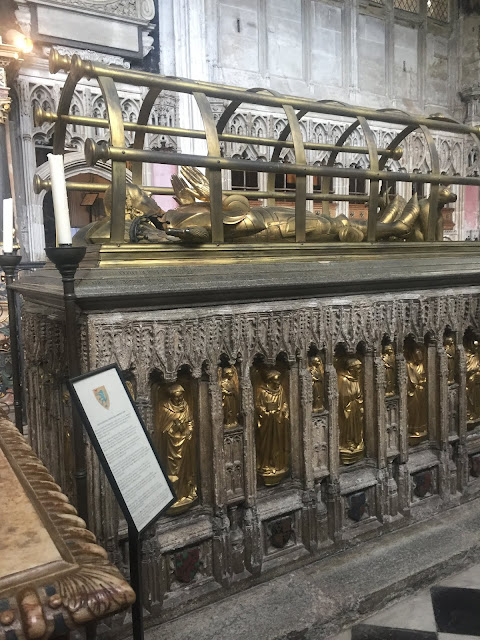 The weather started to turn nasty so Friday was spent just sitting out the day with really heavy rain all day.

Sooz, Ten, Olive, Iris and Desmond the pooch drove up from London on Saturday and after lunch we went for a walk to show them around Warwick. 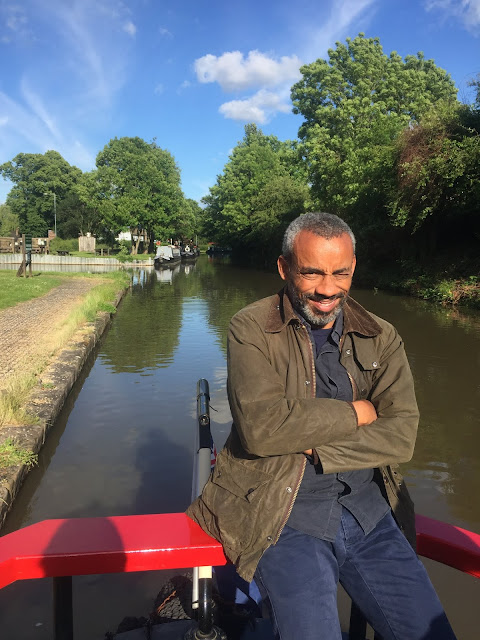 It’s a beautiful old town with so much history.  Unfortunately we arrived too late to go through the famous castle but saw lots of other old Tudor buildings around the town.  We had a superb dinner at The Cape of Good Hope, an ancient canal-side pub.  It even had menu with a Dog Dinner & Dog Beer although they said Desmond was too young!


Today we came up the Hatton Flight - 26 locks - so we were lucky to team up with an Aussie crew on a hire boat.   Ten, with the help of Sooz, Olive and Iris, did all the locks so it only took just over 3 hours.   We then went to the Hatton Arms Hotel at the top of the flight for another ‘Sunday Roast’. 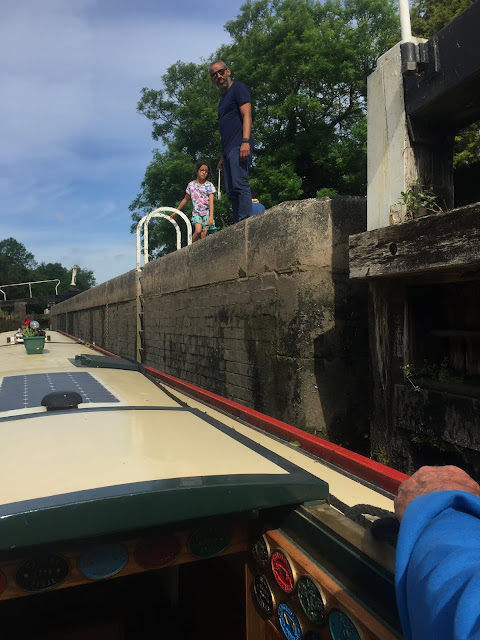 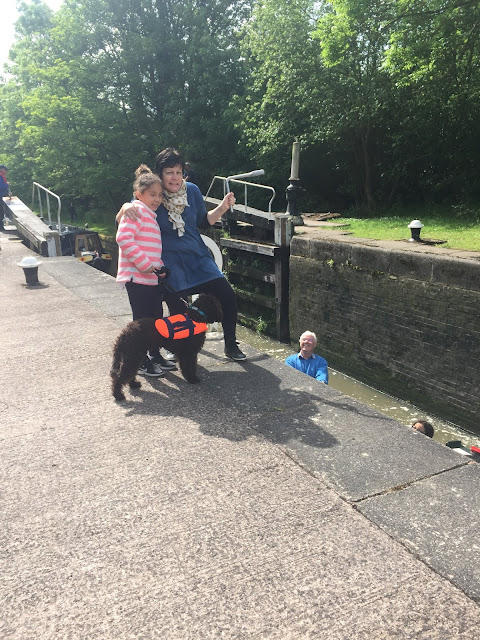 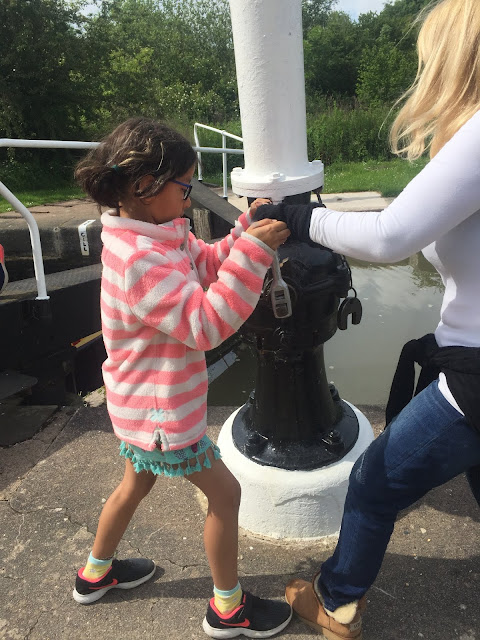 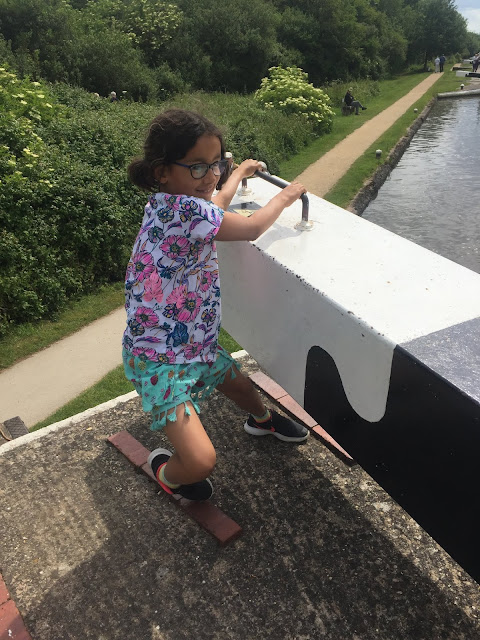 We’re on our own again and heading for the Kingswood/Lapworth Junction.   More news later.