On the way back

ON THE WAY BACK
After leaving Tewkesbury we headed south on the mighty Severn River.   This was great because although the locks are huge they are all manned so it's just a matter of phoning the lock keeper when approaching a lock, waiting til he either fills or empties it then gives the green light signal to proceed into the lock.  Then we just have to attach the boat ropes front and back onto cables on the side of the lock and hold on while the keeper operates the lock.  A massive amount of water either goes in or out - the locks can hold big barges and probably 6 narrowboats all at once.  When the level is right the gates open and we move out.  Sooo easy. 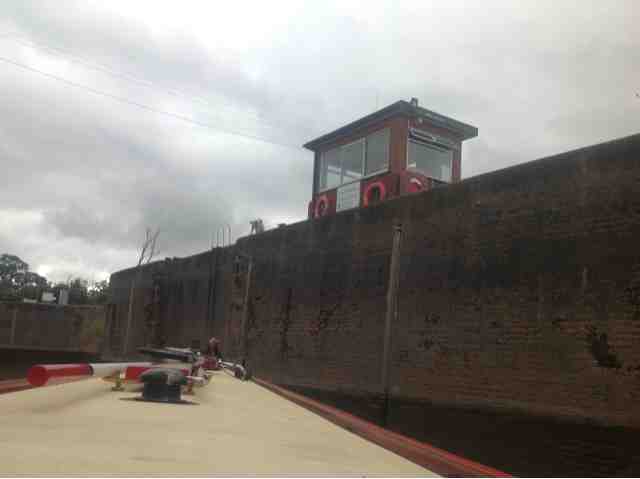 Entering one of the Severn locks.   Lock-keeper works the paddles and gates from his control room up top on the right. 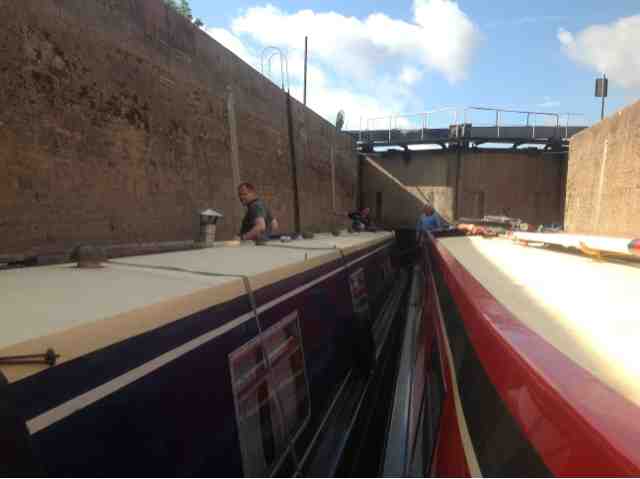 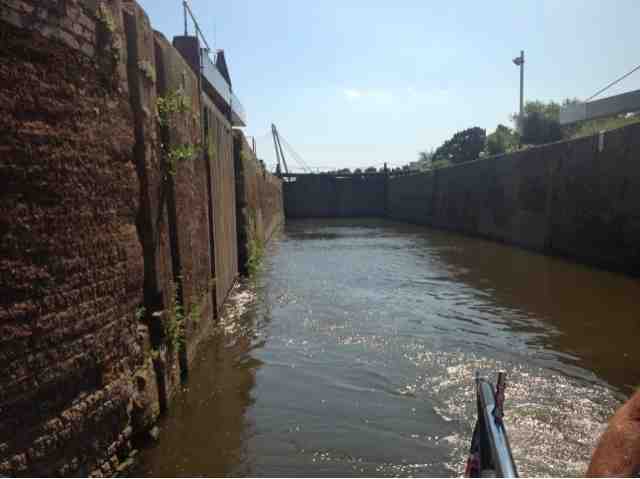 Gates open  -   Leaving the lock
We made it into Gloucester and moored right in the heart of the new docklands developments.  Lots of trendy restaurants and large marble shopping complexes right at the moorings.   Went through Gloucester Cathedral (absolutely huge) and around the town.  Unfortunately in the 50's and 60's the city fathers decided to get rid of a lot of the 'old' historic  buildings and replaced them with concrete shopping complexes and housing blocks which are now looking a bit grubby and tired.
After a couple of days there we went down on the Sharpness Canal which is quite large with big ocean-going ships to watch out for.   All the bridges were either swing or lift bridges manned by Canal and River Trust staff.
Moored up at Frampton-on-Severn, a lovely little village with the largest village green in the UK and lots of quite big manor type houses.  Apparently the feudal system is still in place with the  Lord  of the Manor calling the shots.   Ten, Sooz, the girls and Rita (Ten's mum on holiday from Mozambique) came down from London late on the Saturday night - in pouring rain.   We went out for dinner to a little local pub and all had the house speciality - an individual 'three-in-one' pie which had cauliflower cheese up one end, tatas and veggies in the middle and meat (steak, lamb or chicken) up the other end.   Yummy!    After spending the night at a local B&B our visitors returned for a ride on the boat down the canal where we had lunch and a walk along the towpath in lovely sunny weather before they returned to London that night. Oops - this was taken before we found the children's life jackets 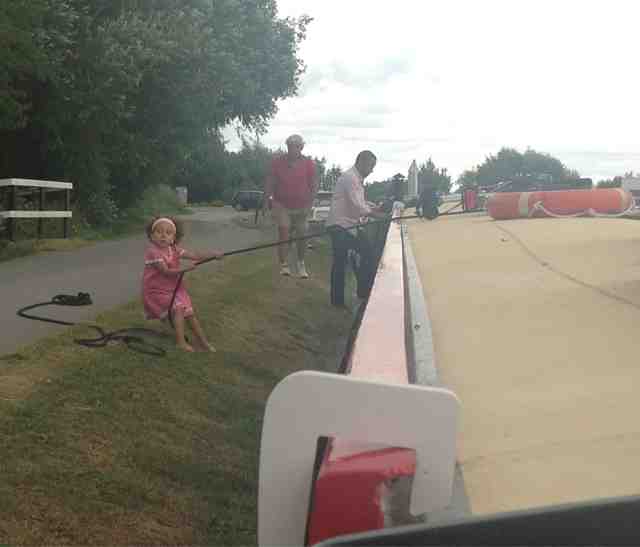 Extra crew members- great!
Next day it was back to Gloucester and along the Severn to Worcester for a couple of nights.  We enjoyed this city much better than Gloucester.   Lots more of the old black & white Tudor buildings still standing, the best cathedral yet and a fantastic old house/museum which was a National  Trust property so us being Victorian National Trust members we got in free.  This home was given to the Trust by a brother and sister who were great antique collectors and lived there until the 1950s so the house has all their original possessions on display.
Stopped off at Upton-on-Severn,  a little village with a unique church tower and which was one of the 'Blooms of Britain' village winners.   Masses of tubs of flowers everywhere which were sponsored by local businesses or people from the village.  Looked lovely.
Then  it was off to Stourport where we were to leave the River Severn and get back on the canal system.   Stourport turned out to be like a seaside carnival town with lots of rides and amusements in the fun fair right next to the canal.   Pity about the weather though - it rained nearly all day on the Sunday so we stayed put and the fun-fair had only a handful of customers.
Spent a night at Kidderminster, which had a bit of a bad reputation as not being a place to stay but we had no trouble. 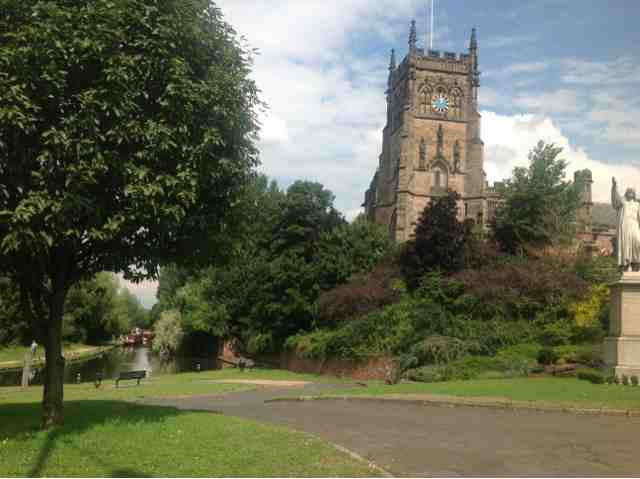 Kidderminster Minster - we're moored up on the left.
Went for a ride on the Severn Valley Railway - a steam locomotive with about 15 carriages filled with geriatrics and school kids (it is school holidays) and us.   Trip took about 50 minutes each way with stations along the way beautifully restored and conductors and drivers all living their dream in old uniforms.
Left the boat at Stourbridge, a town near Birmingham, in a secure area for a couple of days while we went to London by train to baby-sit the granddaughters while Sooz was introducing a new vet to her clinic.   Amazing how much the girls have grown with Iris running around now talking non-stop and Olive starting  'big' school in September. 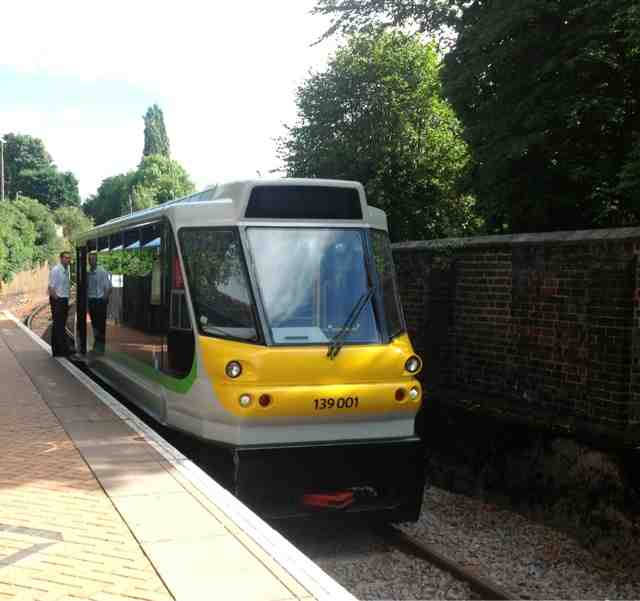 The little train between Stourbridge Town and Stourbridge Junction Railway Station where we caught the train to London.
Back from London we have continued towards Wolverhampton on the Staff and Worcester canal - an absolutely delightful canal - one of the best we have been on with single locks that seem so small after the huge river ones. 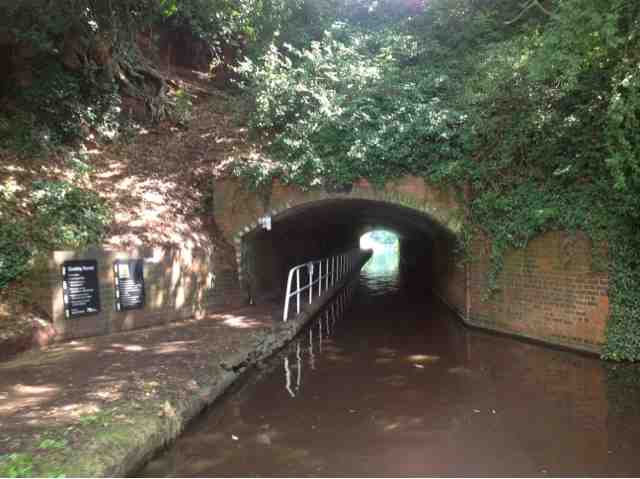 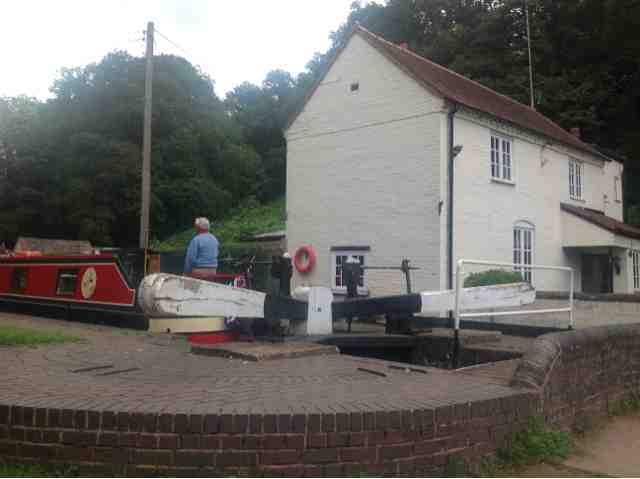 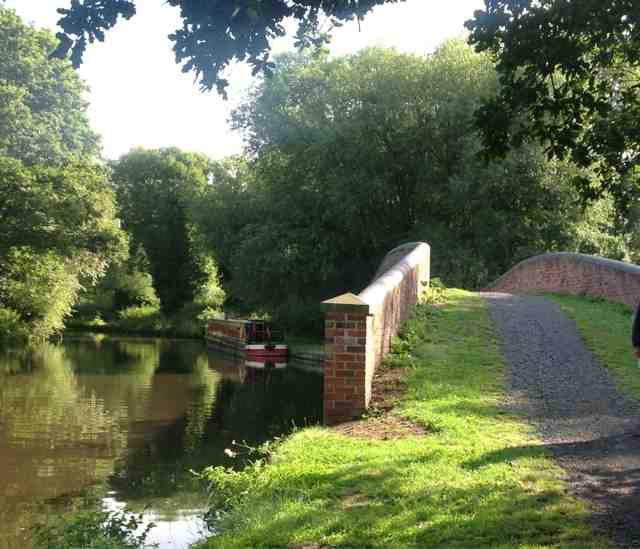 Moored up overnight in  the middle of no-where.
Today we visited another National Trust property - Wightwick  Manor which was built in the 1800s by a local fellow who made his fortune in the paint business in Wolverhampton.    He tried to give it to the NT in 1937 fully stocked with all his treasures.  Because it was only 50 years old the NT really didn't want it but he bribed them into taking it on by giving them lots of shares in his paint factory.   A huge house but a very comfortable family home with large gardens too.
It's still quite warm with just a few showers, mainly at night so that doesn't worry us at all.
Posted by Glen and Terry at 16:34 No comments: