After the family left to return to London we spent the night at the top of the Hatton Flight near Warwick.  Heavy rain was predicted the next day so we set off before 7 in the morning.  There were 21 single locks to negotiate but there were some volunteers on duty and one guy in particular was very helpful.   We moored up in the rain at Hockley Heath.

Next night we met up for dinner at the Blue Bell Cider House with Joe and Ginny who had driven over from nearby Kenilworth.  We bought their home in Broadford before they moved back to the UK in 2012.  It was great to catch up on all their news and of their children Max and Clara.  They are considering moving back to Australia at the end of this year but haven’t made a firm decision yet.

Next day we arrived in Birmingham.  We spent three rainy days moored up in the Gas Street Basin and visited the huge New Street Station which was being built last time we were there.   Loads of shops and eating places in the new shiny complex.  We also had a ride on the new tramway and visited the Mailbox Centre, another shopping complex on the canal, where we called in to the BBC.


Set off for Wolverhampton on another cold and rainy day.   Our computer modem gave up so we were lucky there was an EE shop there where we could get a new one.  Seems to be working quite well. 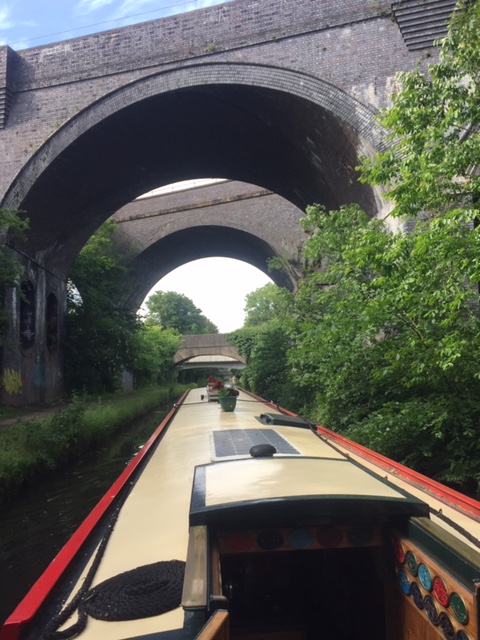 The 21 Wolverhampton locks were next.  The first one was so heavy and stiff that Terry had to work it - and then did the next twenty!   It meant that I had to drive the boat into all the locks.  With only a few inches to spare on each side of the boat I did manage to lose a bit of paint on a few locks but as they say “practice makes perfect” so I obviously just need a bit more practice! 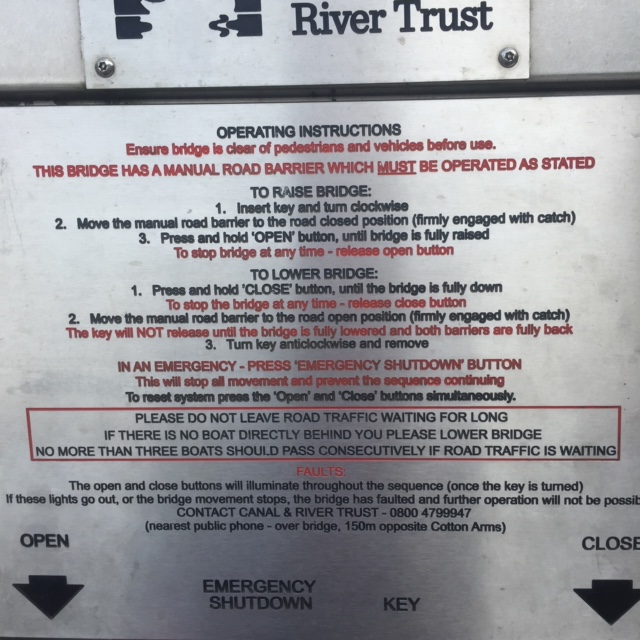 We were having a really cold spell and the heater on the boat decided not to work so we stopped at Oxley Marina at the bottom of the Wolverhampton flight to see if it could be repaired.   We met up with Phil, a Yorkshire man, who worked all day trying to solve the problem.  Finally, just after 5 in the afternoon, he fixed it and insisted on fitting a filter which he said would prevent future problems. 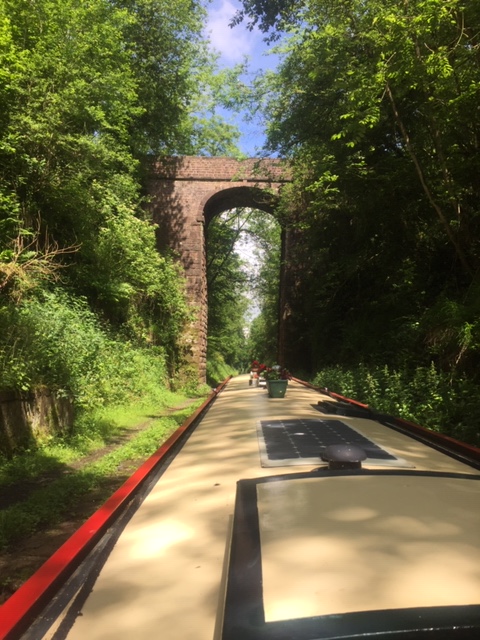 We travelled along the Shropshire Union Canal stopping overnight at Wheaton Ashton, Norbury Junction, Audlem and then Nantwich. 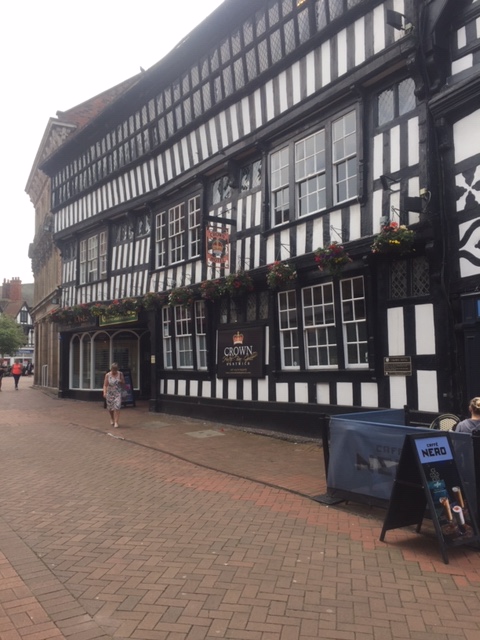 In 2012, the first year we had the boat, we moored up next to a traditional narrowboat owned by Bob Dale who lived in Nantwich.  He was very kind to us then, driving us to Crewe Station when we had to catch the train to London.   He was very surprised to see us again after so long and we spent a couple of hours catching up on all the news of the last seven years. 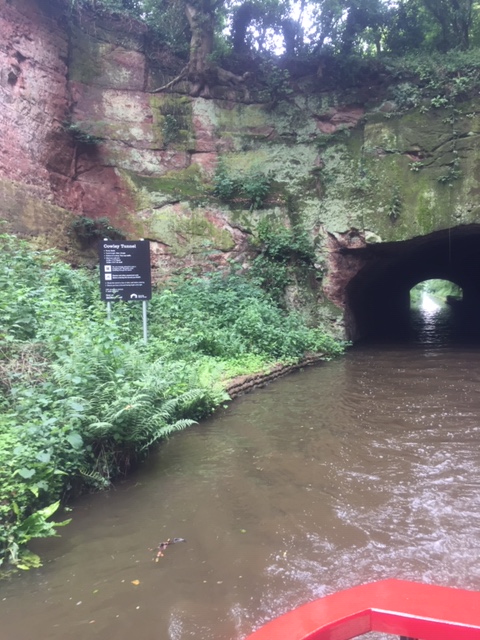 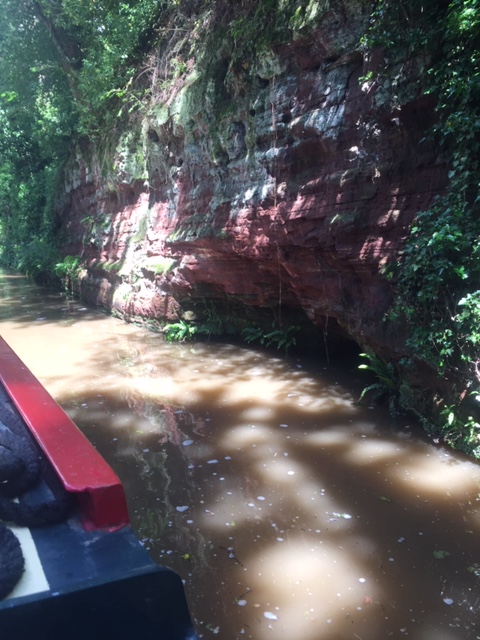 We were heading for the Llangollen Canal but it had been closed for three weeks after the canal wall collapsed with flooding from the river running alongside.  Our timing was great as we heard that boats had started to be let through for an hour in the morning and also at 4 in the afternoon.


We set out from Nantwich and reached the junction of the Shropshire and LLangollen Canals in the pouring rain.  There were four locks at the entrance to the LLangollen and the first one was so tight (the brick walls have bowed in) that the Canal & River Trust people were there to work the locks and get the boats through.  The day before we arrived a boat had become jammed in the first lock and it took til 10 at night before they got it through.
Later that day while doing some locks along the way we met people who had been queuing at the damaged section for days - one was the 22nd boat in the queue to get through that morning.   We got to where the breech in the canal wall was just before 4 so only had a short wait before we were able to go through with just 3 boats in front of us.   We had to turn off the motor and the Canal & River Trust workmen actually pulled each boat through by ropes so the motor turbulence wouldn’t cause any more damage to the wall. 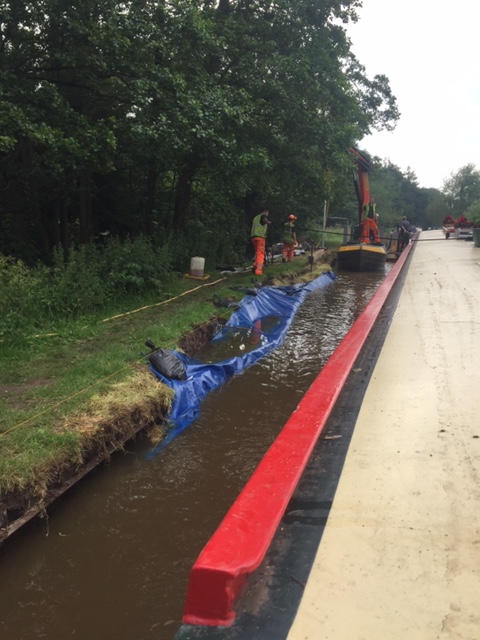 We spent a night at Whitchurch and Ellesmere, 2 lovely Welsh villages then reached Chirk where we crossed the Chirk Aqueduct, designed by Thomas Telford and finished in 1801.  It’s 70-foot high and 710-foot long. A railway viaduct which is slightly higher than the aqueduct was built later alongside the aqueduct. 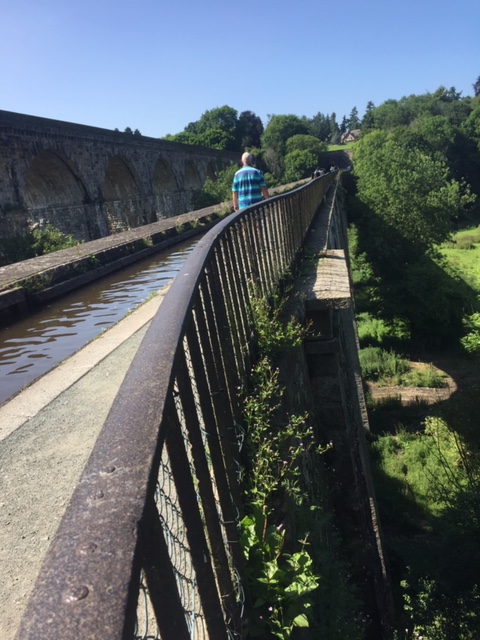 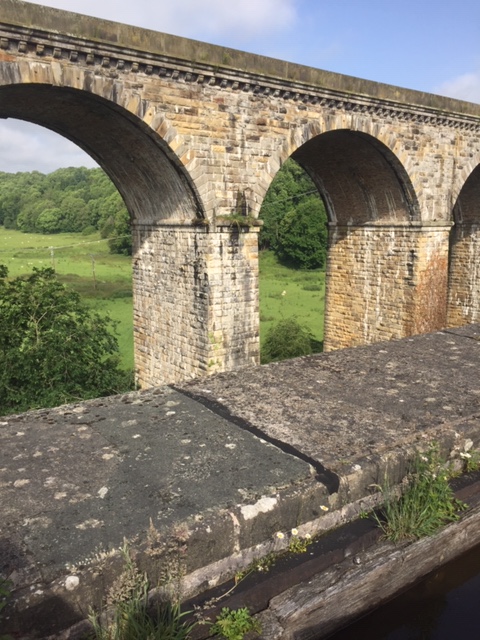 We then reached the famous Pontcysyllte Aqueduct which we had first crossed in 1994 when we hired a narrowboat from the nearby Chirk Marina. The Aqueduct, also designed by Thomas Telford, is an amazing engineering feat.   Taking ten years to design and build it was completed in 1805 and is 120 feet high and over 1,000 feet long crossing the Valley of Llangollen and River Dee.   It’s basically a metal trough on top of 18 stone and cast iron arches and is the longest aqueduct in the UK and the highest canal aqueduct in the world.

Crossing it this time there were lots of walkers using the tow-path to cross and lots of hire boats and sightseeing cruisers as well.  It’s one-way traffic of course so we had to wait for a couple of boats to come across and also for a group of canoeists making the trip too. 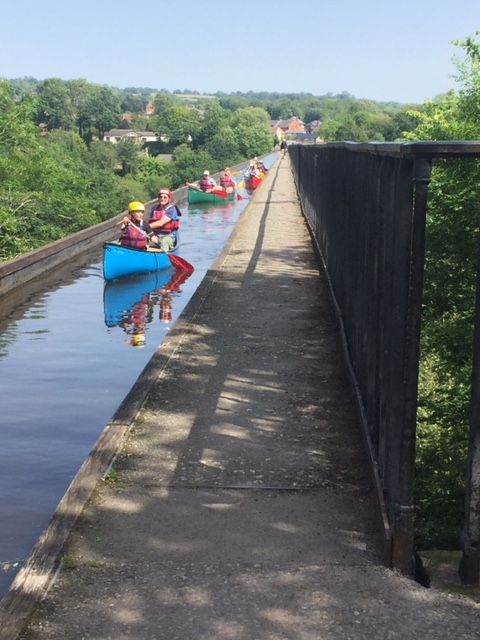 Truly spectacular going across and so high up with just a bit of metal a few inches high keeping the boat in the trough.   Last year we met up with some Aussies who told us they had taken down their flag because they didn’t want anyone to think they were associated with a hire boat which they had followed crossing the Aqueduct.  This also had Aussies on board and they were so scared they got off their boat and walked along the tow path on the other side away from the ‘big drop’ and pulled the boat along with a rope. 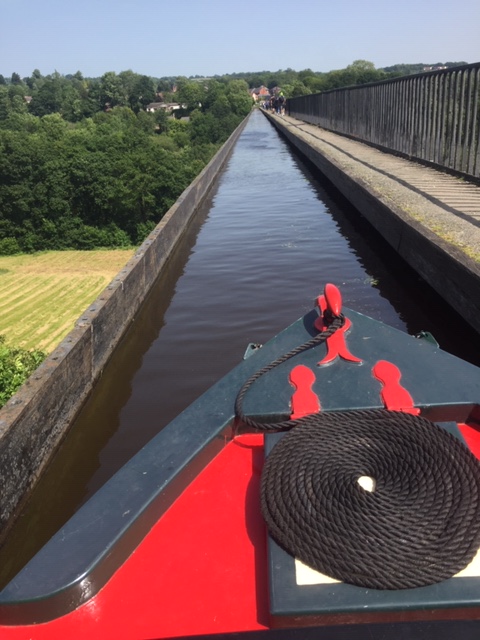 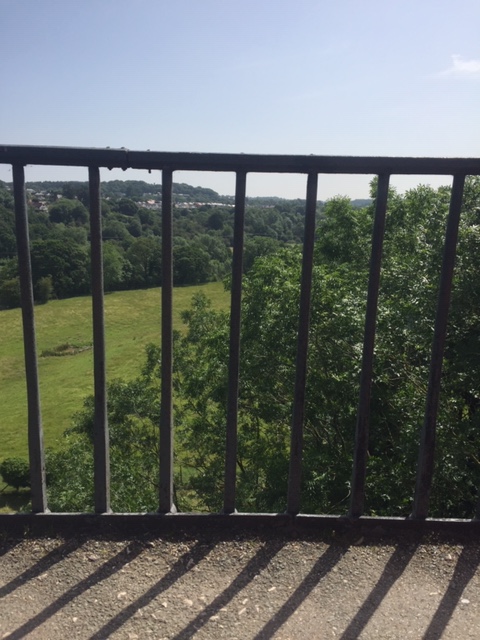 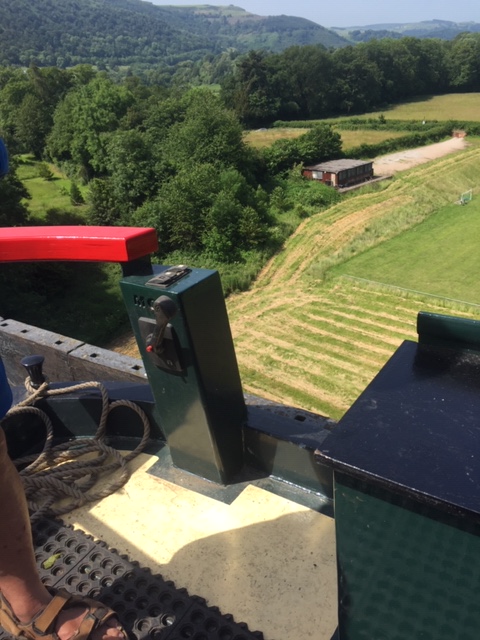 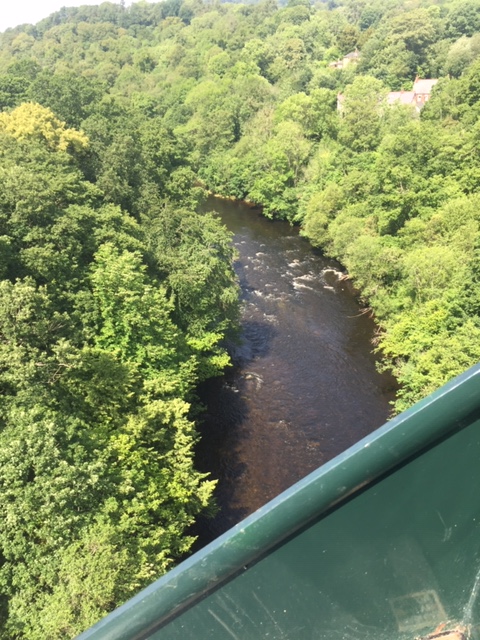 It was a sharp left-hand turn at Trevor after crossing the Aqueduct on the way to  LLangollen. The canal was very narrow and there were two sections, one 300 feet and one 500 feet long, that made it necessary to get out and walk ahead to make sure no boats were coming the opposite way.   The walkie-talkie came into use to advise when the way was clear. 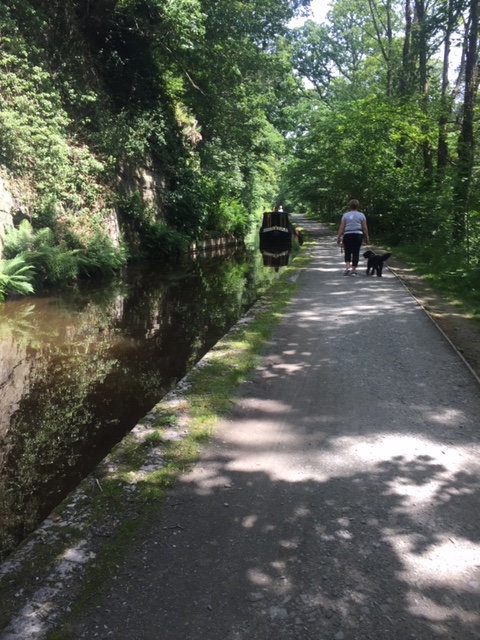 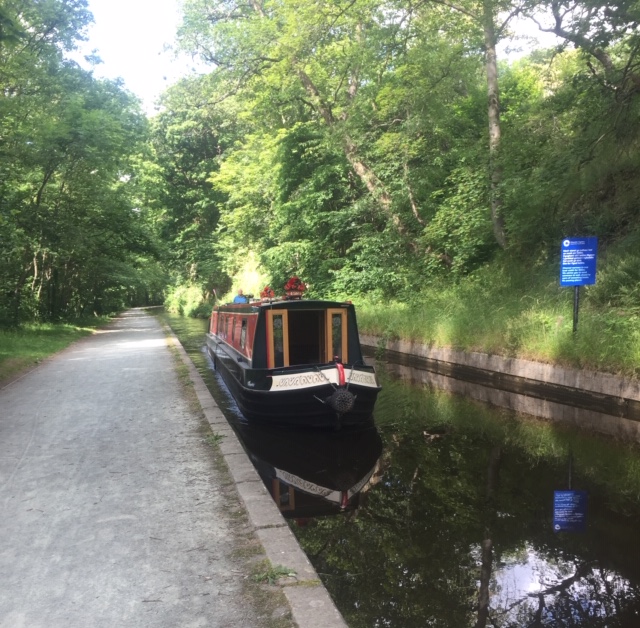 We moored up at the beautiful Llangollen Basin and walked down to the town.   The canal is actually built along the side of a hill way above the town which sits on the River Dee. 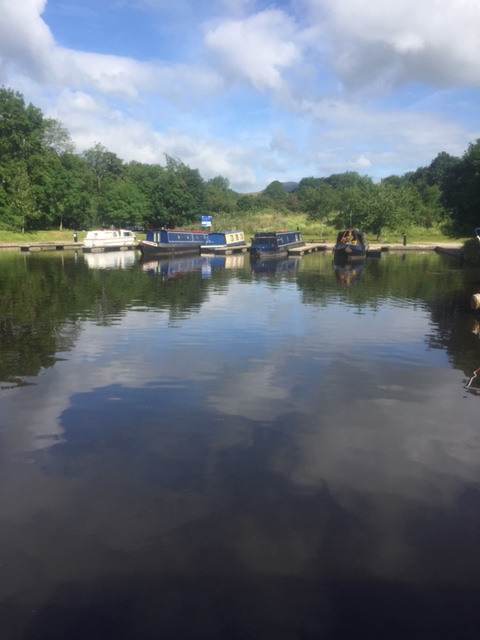 Next day it took the family 5 hours to drive up to LLangollen from London.  They unloaded the car and then drove back to leave the car at the Trevor Basin near the Aqueduct.   They then walked the 5 miles back with Desmond the dog while we took the girls down to see the town.   We had dinner at The Corn Mill, a huge restaurant overlooking the rapids on the River Dee.  The lovely sunny day turned quite cold so we didn’t spend too long on the balcony but walked back up the hill to the boat. 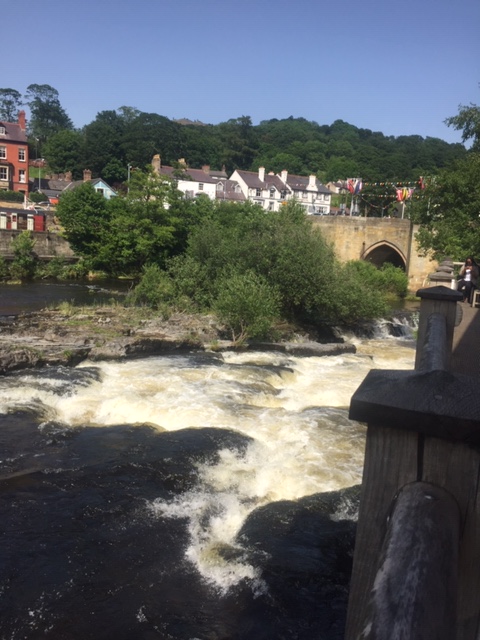 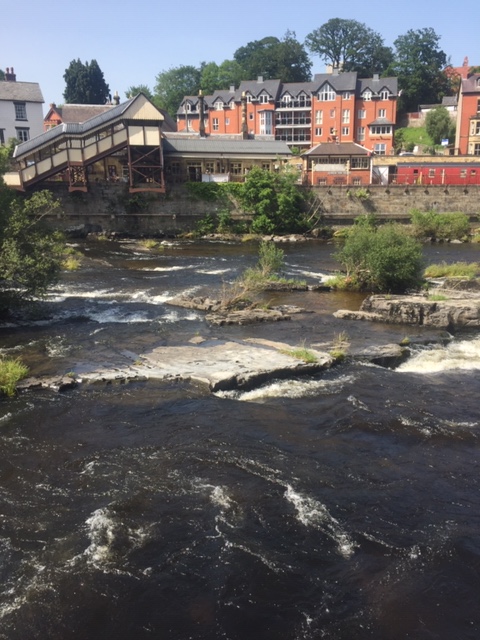 Next morning we set off for the Aqueduct.   Olive had been having nightmares about falling off the Aqueduct when she heard how high it was but when we started across she was so excited she forgot all about her fears.   Ten, who was steering the boat, thought it was brilliant. 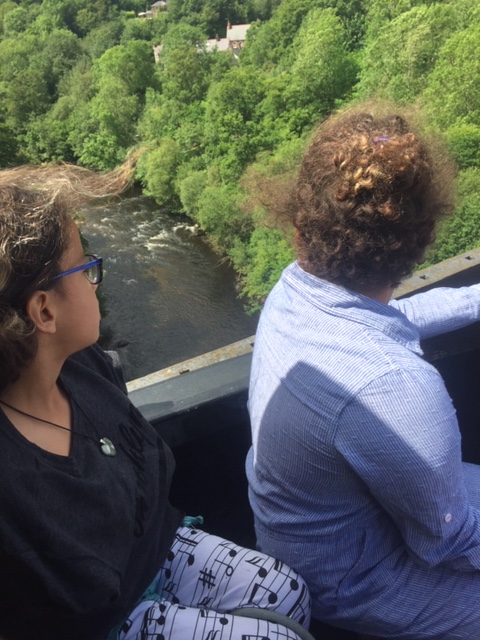 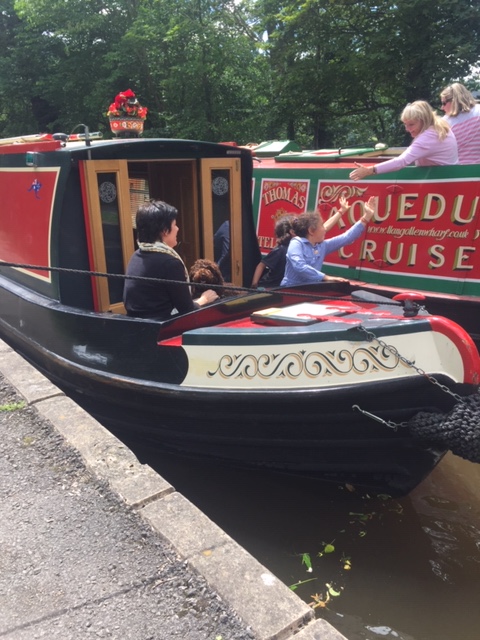 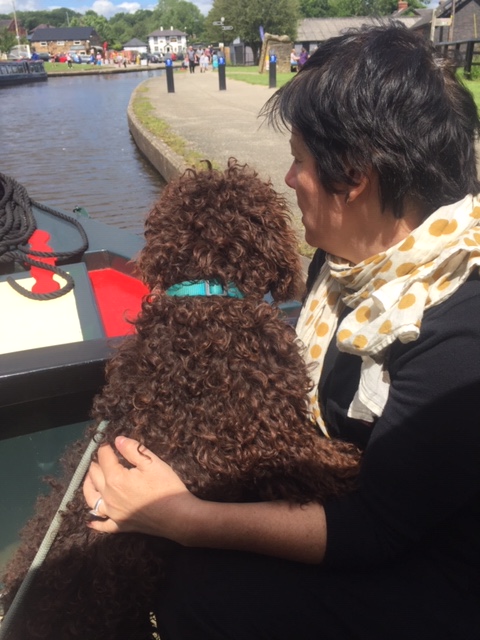 We had lunch on the boat on the other end then made another trip back across the Aqueduct so they could pick up their car and head back to London.  We made our way back towards Llangollen, mooring up out of town near a temporary caravan park.

We discovered the famous LLangollen Eisteddford was to be held while we were there.  Brilliant planning!   Competitors come from all over the world and walk around in national costumes for the week of the Eisteddford.

First we went to the ‘Voice of the Future’ section at the Town Hall (which was not much bigger than the Ruffy Hall).  Competitors were aged 19 to 28 - all with beautiful voices.   The main ‘Field’ was just over from the canal basin where we were moored so we could hear choirs competing early in the morning and then the concerts at night.  It’s a huge area with a main pavilion and 4 other performing stages, loads of various stalls, food areas, circus bits etc.  Looks like a mini Glastonbury.  More than 120,000 people attend each year with
some of the choirs having more than 50 singers participating. 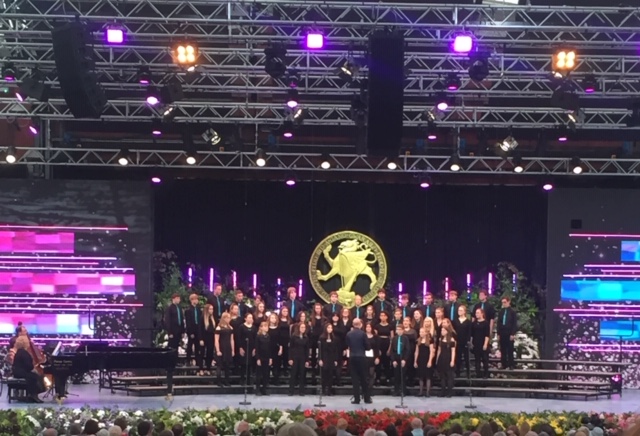 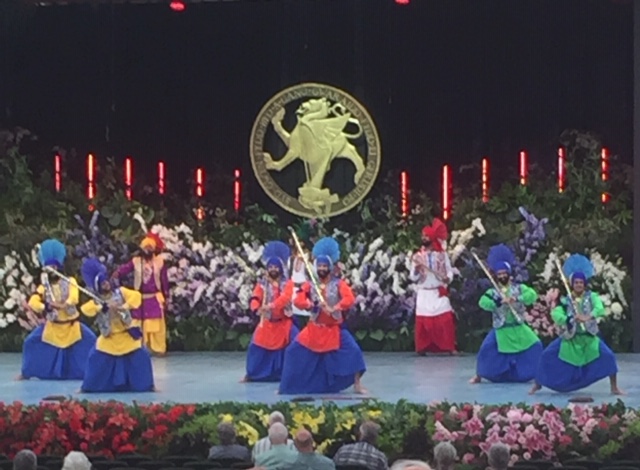 On Friday afternoon there was a Parade of Nations when all the competitors danced their way along the streets of LLangollen.  So colourful - especially the Indians (although someone whispered that most of them only came from Birmingham). 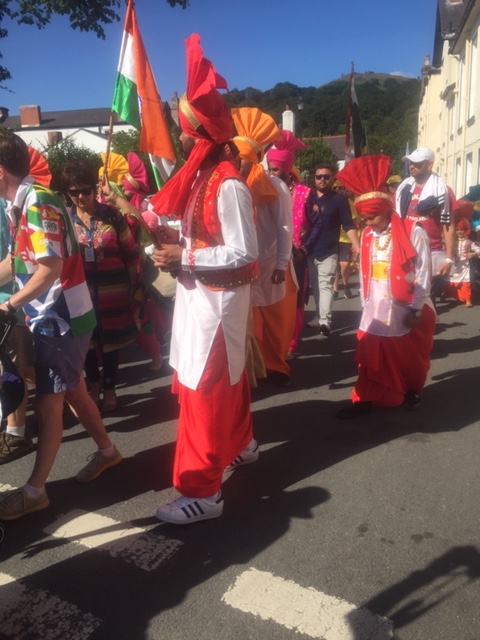 We spent Thursday, Friday and Saturday at the Field and saw a great variety of acts - from choirs and soloist singing, instrumental acts and national dancing and there was even an amazing group of Buddhist monks who had been allowed to leave China for the first time in 1500 years.   They did some incredible contortion movements - didn’t know the human body could bend so much!

We left the Basin on Sunday morning and moored up a mile or so from town where we left the boat to hire a car to discover some of northern Wales.