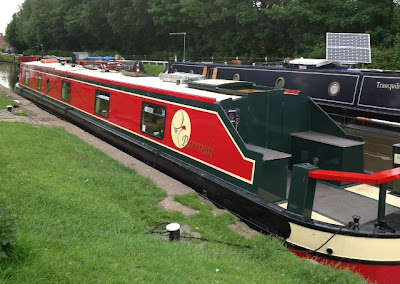 When we were in the UK in 1996 we hired a narrowboat on the Llangollen Canal in Wales for a week.   We absolutely loved the experience and always planned to live on a narrowboat again if we returned to England for a holiday.  Now with family living in London the dream has become a reality.   In January 2012 after selling all our alpacas we purchased our own narrowboat (formerly called 'Eziduzit').

NB 'Parrindi' ' - our  6 berth boat which is 65 feet long but only 6’10” wide so it can fit through the lock system has everything needed for on-board living, including kitchen, lounge with TV etc and bathroom as well as central heating, if needed.   A 600 litre water tank can be topped up along the canals at British Waterways depots which also have toilet waste facilities and skips for rubbish disposal.

The canals cover most of England and it is possible to travel from London in the south, over to Wales in the West and up to York in the north.   Boaters can moor just about anywhere along the banks of the canals for up to 14 days at no charge as well as right in the centre of most of the big cities – London, Birmingham, Manchester and Coventry to name just a few.   There are many marinas along the canals which provide moorings too but these charge ‘by the foot’.   Maximum speed on the canals is 4mph except when passing another boat or moored boats when the speed limit drops to 2mph.

On arriving in England we journeyed along the Trent/Mersey Canal which included the towns of Burton-on-Trent, home of most of the famous breweries in the UK because of pure underground water which goes through gypsum deposits and also Stoke-on-Trent where Wedgwood, Royal Doulton, Moorcroft, Coalport and forty other potteries are still producing fine china.  There are fascinating museums and factory tours at both Burton and Stoke to learn the history of their industries.  Before the railways commenced, the canal system was vital in this area in the 1700 and 1800s to transport raw materials and finished products.

We also travelled along the Shropshire, Caldon, Coventry, Staff & Worcester, Oxford and Grand Union Canals which involved working lift bridges, swing bridges and more than 150 locks – the incredible system used to raise or lower boats.  Most of the locks are only a few inches wider than the narrowboats so there were a few places on the Parrindi paintwork which needed to be touched up at the end of the journey.   The water levels in the locks which take boats up or down ranged from just 4” to 15 feet and most locks fill or empty in less than 10 minutes.
When approaching a lock, the ‘crew’ jumps off the boat onto the towpath and opens the huge gates if the water level is right, otherwise winds the paddles up or down depending on whether the boat is going uphill or downhill.   The ‘captain’ then steers the boat into the lock and the gates are closed.  The paddles are then raised or lowered at the other end so the lock fills or empties to the right level before the gates are opened and the boat moves out.  Etiquette is that the gates are always closed and paddles lowered before the ‘crew’ gets back on the boat.   There are some places where there are fifteen locks all within a mile so it certainly is a muscle building exercise.

In the 1700s and 1800s when the canals were constructed narrowboats were used to transport goods all over England and horses walked alongside the canals on the towpath pulling the boats.   Sometimes tunnels were built to go through  hills and were so tight with no room for a towpath that the horses would be walked over the top of the hill and the boatmen would ‘leg’ the boat through the tunnels - this involved lying on their backs and pushing the boat along with their legs.   We had to take our fold-up bikes off the roof of the boat in the 2,926 yards long Harecastle Tunnel (built in 1777)  which took 45 minutes to go through as the tunnel roof was so low - but it was much easier having a engine rather than having to ‘leg it’ through.

The Queen’s Jubilee celebrations, Andy Murray making the Wimbledon final, UK’s Bradley Wiggans winning the Tour de France and to top it all – the Olympic Games in London as well as other venues - meant continual excitement for the Brits in 2012.  Even the little villages celebrated with loads of bunting and floral displays which continued to look amazing as June and July were exceptionally wet and cool.   The month of June was the wettest since records began but as some canals had been closed because of drought conditions the rain was welcomed by the canal community.

After spending last June and July on the canals, Parrindi has been moored up at a marina at Welton Hythe (near Coventry).